Three-time All-American, seven-time BIG EAST champion and two-time Penn Relays champion … One of 41 runners from Villanova to run a sub-four minute mile … Ranks eighth on the Wildcats all-time performance list in the Mile … Has been a first team All-American indoors in both the Mile and the distance medley relay … Was the Outstanding Track Performer at the indoor BIG EAST Championships in 2019 … As a sophomore in 2018 became the first Villanova men’s runner since 1982 to anchor two winning Championship of America relays in the same year at the Penn Relays … Has established himself as a national contender at every distance from the 1500 meters through the 5000 meters … One of the team’s top cross country performers … Was the Mid-Atlantic Region Athlete of the Year in 2018 after winning the BIG EAST and NCAA Mid-Atlantic Regional individual titles, as well as garnering All-America recognition for the 2018 season.

“I am beyond excited for the opportunity to continue my running career with Atlanta Track Club,” said Wilson, who will move to Atlanta later this summer and be coached by Amy and Andrew Begley. “I have so much left to accomplish and so many more goals to reach. I am grateful this is going to be the place where all these dreams and goals come true.”

In May, Wilson placed fourth in the 800 at the NCAA Outdoor Track & Field Championships. That strong performance followed up her fifth place finish in the 800 at the indoor championships in March. At Monmouth, Wilson won 13 individual and relay Metro Atlantic Athletic Conference titles and was twice a first team All-American, the only female athlete in school history with that distinction. 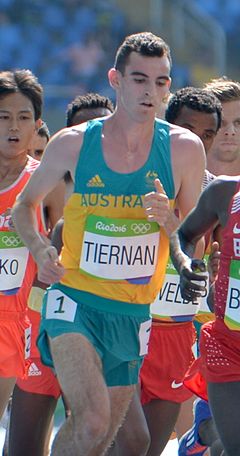 Qualified for the 2016 Olympic Games and is the 2016 Men’s Division I National Cross Country Champion. Tiernan was born in Longreach and raised in Toowoomba, where he took up distance running.[4] In July 2012 he won the 10 kilometers race that was part of the Gold Coast Marathon.[5]Tiernan was recruited by Villanova in January 2013 and missed out on the first indoor and outdoor track seasons. At the 2014 NCAA DI Indoor T&F Championships, Tiernan finished in seventh place in the 5000 meters final round. At the 2014 NCAA DI Outdoor T&F Championships, Tiernan placed sixth in the 5000 meters, earning his first All-American honors in track and field in his NCAA collegiate career. He placed second overall at the 2015 NCAA DI Cross Country Championships behind Edward Cheserek, whom he beat in 2016 when he won the men’s overall title.

Camp is BACK and we can’t wait to see you all!!